I have just spent the last hour watching the Channel 4 documentary, Turtle Boy (www.channel4.com/programmes/bodyshock/video/series-27/episode-1/bodyshock-turtle-boy), which tells the story of a 6-year old Colombian boy who suffers from Congenital Melanocytic Nevus, presented, in his case, by a giant mole covering his back. Didier’s condition was broadcast on radio, with the radio presenter comparing him to the heroic cartoon characters of Ninja Turtle fame, hence the nickname, Turtle Boy. As a result of the broadcast, Colombian locals raised sufficient funds to pay for much needed surgery for the removal of Didier’s ‘shell’, thereby enabling him to lead a life free of his 5 kilo burden.

Turtle Boy was inspirational to watch, not least because of the faith Didier’s mother, Luz, displayed and also that of one of his surgeons. Didier’s mother felt guilty because folklore had decreed that her encounter with a solar eclipse had caused her son to be born with CMS. The doctors, of course, told her that it was not her fault that Didier had been born with the disease. However, despite Luz’s slightly superstitious bent and questioning of her Christian faith because of what her son was suffering, the overwhelming impression is that of a woman of faith: not the type of faith that demands a showbiz-type miracle, but a steady faith that expects great things of her God, and marches on despite the odds.

Psalm 62:8 exhorts Christians to ‘Trust in Him at all times, O people; pour out your hearts to him, for God is our refuge.’ And that was what Didier’s mother did. Luz never failed to pray and hope in God’s love and provision. We see her reading the Bible and, young as Didier is, he recognises her faith and comments on the fact. I think the poem below, ‘Footprints in the Sand’, adroitly captures the faith relationship between human and God. 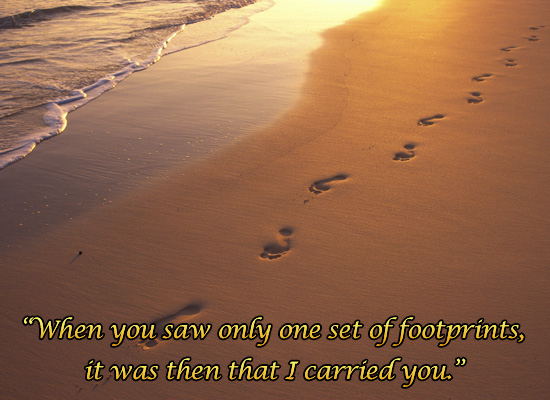 One night I dreamed I was walking along the beach with the Lord.
Many scenes from my life flashed across the sky.
In each scene I noticed footprints in the sand.
Sometimes there were two sets of footprints,
other times there was one only.
This bothered me because I noticed that during the low periods of my life,
when I was suffering from anguish,
sorrow or defeat,
I could see only one set of footprints,
so I said to the Lord,
“ You promised me Lord,
that if I followed you,
you would walk with me always.
But I have noticed that during the most trying periods of my life
there has only been one set of footprints in the sand.
Why, when I needed you most, have you not been there for me?”
The Lord replied,
“ The years when you have seen only one set of footprints,
my child, is when I carried you.”
--Author Mary Stevenson--
(Photo courtesy of TC at www.trinituner.com/v3/forums/viewtopic.php?t=407036&p=5798560.)

What I like about Luz is her ‘ordinariness’ and ‘realness’. Luz is not rich or famous. She suffers because her son suffers. Her faith was severely tested when Didier was born with CMS. Yet, she clings on to hope, continues to read her Bible and trusts in her Lord. And when the operation on Didier is a success, she has Didier baptised as a token of thanks to God.

The other thing that struck me about the film was how warm and kind the surgeons were to Didier and Luz. There seemed to be a true community spirit. In particular, I was very taken by the fact that one of the Columbian surgeons displayed his faith so openly. He prayed with Didier and Luz prior to the operation – and when I say ‘he prayed’, I mean that he truly prayed – with heart and soul, asking God to use his hands and surgical skill as a means of divesting Didier of the mole, thus saving the 6-year old boy from a potentially life-threatening disease should the mole turn malignant.

I thought it was just so wonderful to see a skilled surgeon humbling himself before God, to whom he entrusts the work to be done on Didier. I cannot see this happening in the UK, where the former Archbishop of Canterbury, Lord Carey, has said that Christians are being marginalised: ‘Lord Carey warns ‘Christianity marginalised’. His warning came after the High Court ruled a council acted unlawfully by allowing prayers at the start of meetings, a ruling which could affect councils across England and Wales.’ (www.bbc.co.uk/news/uk-england-devon-16995239).

The other thing I thought was really nice to see was how ‘fatherly’ the Colombian surgeons were to Didier, whose own father had deserted him and Luz when he was born and never wanted to see him. One film clip shows a surgeon hugging Didier and another shot shows Luz buzzing a surgeon’s cheek in gratitude for the successful removal of his huge mole. Another affecting clip shows a Colombian consultant hugging and comforting Luz after she has waited for hours to hear the results of the initial surgery. The real regard that was expressed so affectionately between patient, mother and consultants in the documentary could not, I think, be as easily replicated in this country in case of allegations of physical abuse. Yet, in the film, it was all so natural, with no sense of any hidden agenda but kindness, gratitude and warmth.

For me as a Christian, I was particularly touched by the contrasting simplicity and complexity of Luz’s faith. Christians can be vulnerable to doubt, especially when things go awry. How often have I myself repeated after the sick boy’s father, ‘I do believe; help me overcome my unbelief.’ (Mark 9:24) As for the surgeon who prayed with Luz and Didier before the first operation, I feel nothing but great respect for him – he was entrusting his work to the Lord, asking for divine guidance and meaning it. He was sharing his faith with Didier and Luz, and showed humility when he acknowledged that God is the true Master and Healer.