Dusk comes early in January, so late afternoon walkies with Zack at Penny Rock Wood was not a good time for taking clear photographs!

Penny Rock Wood was looking very pretty, chockfull of fresh greenery and peaceful with intermittent birdsong except for the hum and, sometimes, revving of car engines by certain boy-racers clearly heard from the A591 bordering it. There was one other thing which detracted from the walk: someone had dropped an empty plastic drinks bottle in the middle of the woods, rather than held onto it for safe disposal after his or her walk. Most uncivic indeed to my mind, and certainly not environmentally friendly. What is wrong with people? They want nice places to walk, but then they don’t take their rubbish home with them! 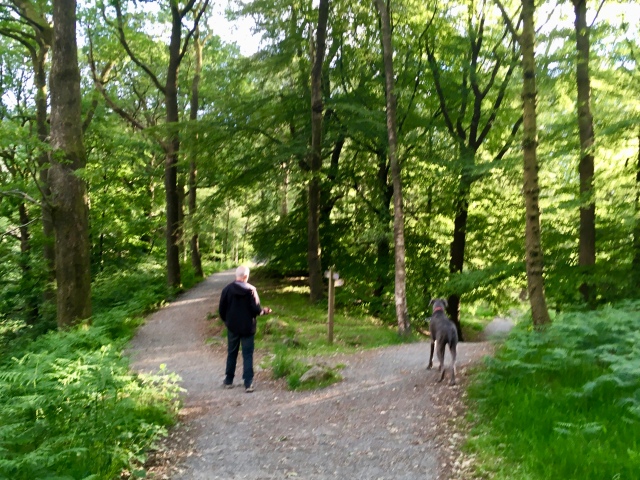 Which way should we go? Left or right?

My apologies – I digress. Back to my sweet little tale. This time, now without our dear departed Zack, we took took a different path through Penny Rock Wood on our way back to White Moss. From the bottom of the path, everything looked easy enough to negotiate. It was narrow, and there were copious ferns on both sides of the path, but we couldn’t see any major obstacles and it looked straightforward enough. We began climbing up, with Horatio leaping ahead as Hubby held on to the lead. I was bringing up the rear when I suddenly realised how steep the path was getting! Nevertheless, we reached a small grassy ridge and carried on. All was looking very pretty.

The uphill path in Penny Rock Wood that didn’t look steep until one started walking up it, and then it felt steep the higher up one went!

The trouble began when we started our descent off the ridge. The path was easy enough to begin with, but there were slippery bits of damp bare earth. Horatio, with his four large feet, and Hubby, with his surefooted size 11s, made good headway. Meanwhile, I trod carefully and gingerly downward, looking for something to grasp in order to aid my descent. There was nothing to hold on to! I dithered and pondered and swithered between this and that solution of making my way down. The other two waited patiently for me. Hubby was only five feet or so downwind from me, but it wasn’t feasible for him to come back up to get me because of the way the footpath was. Meanwhile, the minutes ticked away and he suggested various solutions to my dilemma. I was terrified of slipping and falling, and tried putting my weight on one foot and then the other in hopes of finding a sure grip upon the slippy soil. 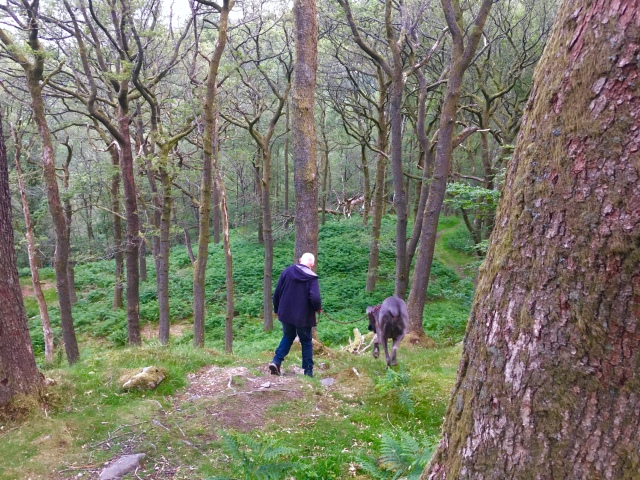 This was the easy part of the ridge we walked in Penny Rock Wood. I couldn’t take a picture of the bit where I was stuck because I didn’t really want to move in case I fell!

Horatio had been very patient all this time. He stood and watched; found a stick, and then another; tasted both and then discarded them; bounded back to Hubby who was holding the lead, and then back up to me. And then, out of the blue, he was by my side – this time to help. He must have decided to take things into his own paws! Hubby called out for me to hang onto Horatio’s collar and let him lead me down. I didn’t want to do that because I needed a larger surface area to get my balance. Giant dog that he is, he was just the right height for me to put both hands on his back to steady myself, and then he let me hold onto his body as he gently led me down. I was so relieved, but even more so, I was so proud of my boy for thinking things out on his own and coming to help me! I would never have called him to come over and help, but he had done so of his own accord. 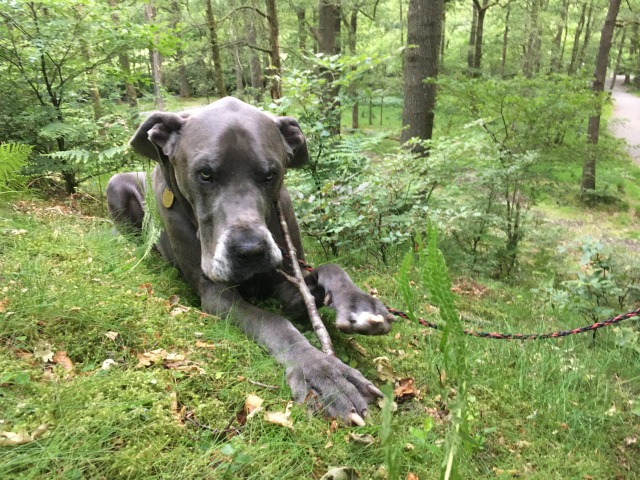 Our Great Dane relaxes on the sloped part of the ridge where I was stuck with his stick!

How thrilled I was to actually be on a firm footing again! I had really begun to think at one point that I might have to bump my way down the path except that I didn’t want to get my jeans and hands dirty. Great Danes have a way of looking a little silly, but they are actually very intuitive and intelligent as we have found out during the time that we’ve had him. However, I didn’t realised how much intuition they had to assist until then.

We walked along the edges of Rydal Fell on the same walk. Doesn’t the place look stunning?

So, that’s my hero dog story of the day. Have you any hero dog stories? Please do feel free to comment and share. I’d love to hear your stories too!

Blenheim Lodge . . . panoramic Lake views, peace and tranquillity, nestled against acres of beautiful fields and woodlands, in the heart of the English Lake District National Park.’

Like Loading...
This entry was posted in Activity Breaks, Behind the scenes in a B&B, Blenheim Lodge, Climbing in the Lake Disstrict, cumbria, dogs, English Lake District, grasmere, pets, Rehoming for dogs in Rescue, travel, woodland views and tagged cumbria, English Lake District, fell walking, Great Dane, Rehoming a rescue dog, walking in the lake district, working in a B&B. Bookmark the permalink.